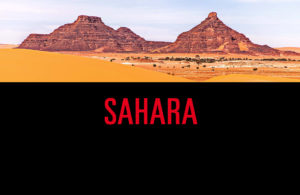 In 2002 I went for the first time to the inner Sahara desert. It was in southern Algeria, the area of Tamarasset, Djanet, the Hoggar mountains, the Tadrart Rouge and Tassili n´Ajjer. I had to idea what to expect and was totally stunned by the scenery, not only dunes, but also mountains which reminded me of Monument Valley in the US.

At that time I still took slides, so the pictures you see here are scans from these slides. There is something I didn´t and wasn´t able to catch with my camera. First, the fantastic sky of the Milky Way, at times full of shooting starts. And second, the absence of sound. You don´t know how quiet it can be, if you haven´t been there.

Another thing I didn´t expect the way it turned out was the weather. It actually was raining a few times. Some people on the tour came without a tent, that was a real problem then. And because of the rain, our cars often got stuck in the water and wet underground. Otherwise the temperatures were quite comfortable, never too hot and not too chilly at night. And it´s not only the landscapes which were awesome. Also the ancient painting and carvings, the rock art, was fascinating.

After that tour to the Algerian Sahara I was sure, that I´ll go again to see the desert at a different place. However, it took me until 2019 that I finally went again – to Chad. The main destination was the Ennedi Plateau. And again, it was an awesome trip. The landscapes, the people, the way of travelling, the whole package, simply sensational. The weather was pleasant again, no rain this time, but one moderate sand storm. It´s not easy to travel in Chad and not everywhere it´s safe. And it takes time, it´s not a small country. Some day I also want to experience the Tibesti Mountains. But to see this extremely inaccessible area you´ll need a lot of time, much more than the two weeks for this tour.

So, of course, I want to go again to the Sahara. To Tibesti in Chad or to other areas and countries in this vast desert. Let´s see when this will be.