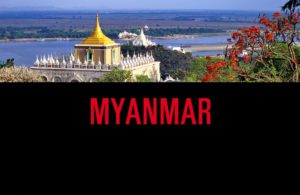 Travelling to Myanmar in 1993

This is another old series from a long time ago visit in 1993 (https://www.google.de/maps/place/Myanmar). The pictures were taken as slides, as I usually did before the digital age. Myanmar is one of the most colorful coutries I´ve seen so far, certainly with the most gold around. And the density of pagodas is simply amazing.

At that time, in the early 90s, only few tourists were in the country, hotels were also very few, electricity was limited and frequently breaking down. Fridges existed, but without electricity they were merely containers, that was the time when I learned to enjoy drinking warm beer. Travelling was done by train, hired car with driver (very good!), and airplane. If you wanted to use the fast way to your next destination, for booking you had to go to the airport one day before your flight, earlier bookings were not possible.

If you travelled to Myanmar recently you may recognize some of the places where I took the pictures here. Does it still look the same, how much has changed?

You can also compare the pictures to the series Vietnam and Cambodia, where I also went in 1993. How do you think about the changes there?