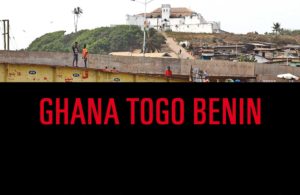 From the end of December 2016 to the beginning of January 2017 I visited the neighbouring countries of Togo, Benin, Togo and Ghana in Western Africa. The only times I´ve been to Western Africa before was in 2013 to Cabo Verde, and very long ago to Mali (when it still was a safe country to visit).

Touring Western Africa is always some kind of adventure. It´s not the place to go if you are looking for a relaxing holiday. Although there are 5 stars hotels at the beach where you could do just that. At the end of the tour I stayed in such aplace in Ghana´s capital Accra because my flight was delayed.

It´s a kind of adventure for a tourist because there is not so much touristic infrastructure. The concept of tourism isn´t really something of importance there. One example are the Royal Palaces of Abomey, you´ll realize that, when you are there. However, or because of that, you´ll get a deeper feeling for the countries and their people – as much as it is possible to experience in a too short time.

In Ghana the major stations were Accra, Cape Coast, Kumasi and Tamale. In Togo it were Lomé, Sokode and Kara, in Benin Ouidah and Abomey.

There is much to learn about the history of the slave trade, it´s deeply impressive and depressing.

Fascinating is everything around voodoo, the temples and ceremonies associated with it. But I had not enough time to get anything more than a superficial glimpse into that culture.

And when you travel there, don´t forget to try the local food, especially when you are travelling with an organized tour.